If you follow the chit-chat of twitter and the technology “press” you’re very likely to have come across Spurious Correlations, a site showcasing the absurdities of “big data”. 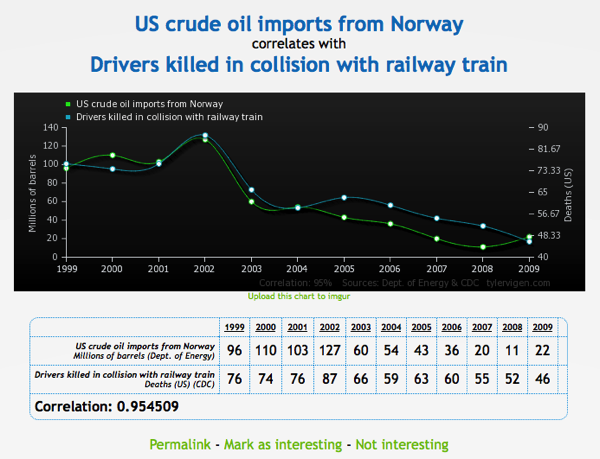 That is a very roundabout way of saying what a lot of critics of “data journalism” and “big data” have been shouting from the rooftops for a while now: just because there’s a correlation doesn’t mean there’s actually a connection between datasets. And that’s before taking into account that by overfitting and assorted other means of statistics, you can kinda manufacture correlations.

But that alone wouldn’t be very problematic. Statistics had to, and continues to, battle with this problem for a long time now. The problem arrives once we start collecting and correlating data on large scale with very concrete impact on everyday life.

Take for instance the latest coverage of the potential impact of health-tracking devices on the overall healthcare system and health insurance specifically. We’ve seen coverage of employers systematically equipping their workforce with fitness trackers to drive down health care costs and the providers of those fitness trackers starting to sell that data of insurers outright.

The Quantified Other: Nest And Fitbit Chase A Lucrative Side Business – Forbes

This is problematic on a couple of fronts: first, it perpetuates an existing bias for able-bodied employees, and secondly, it relies on the implicit assumption that activity as measured by the devices maps to better health outcomes, completely disregarding the individual capabilities of the persons tracked. Nevermind the extension of reach employers have over their employees.

And then there’s the question of what those fitness trackers actually measure and try to motivate you to do. We want people to be more active, to develop healthier habits (and this is foregoing the whole argument of us having to possibly address systemic challenges first before we attribute blame and try to fix behaviour at the individual level), and to generally »level up«. But on the design front, there’s very little discussion around how to actually encourage sustainable behaviours.

One other thing that I’m still a little fixated upon is what happens when wearable devices are successful. From a mental health point of view, one of the things that I realised about myself was that I was only really happy when numbers were trending in the right direction. When blood sugar and weight were coming down, that was great. But the wearable systems that we have at the moment aren’t particularly good (and obviously that depends on how you define ‘good’) for what happens when the numbers are trending in the wrong direction. Or, what happens when you don’t need to progress to a goal state, but that your goal state is instead a *steady* state. For me, stereotypical language like the Nike Fuelband includes exhortations to Crush It and Win The Day, which (again, this may be idiosyncratic) imply a relentless striving for betterment that may not be each and every user’s goal. Maintenance, as opposed to excellence, requires a different type of design.

Episode Sixty Two: Wearables Unworn; Look At What They Want

And, to quote from another Dan Hon episode:

If you’re sensing, then you’d better have either novel sensors or outstanding data manipulation, because the sensors have become pretty much commoditised now that it’s trivial to whack a three-axis accelerometer in a thing and now that everything has a three-axis accelerometer in it, you’d better be able to deliver on the promise of your sensing which, to be honest, probably doesn’t live up to what the public thinks of your device, no matter what you actually tell them. Fitbits and Fuelbands should measure *effort*, in a consumer’s eyes, but don’t, and the degree to which they’re able to fulfill that promise relies upon your smarts with data.

Looping back to Spurious Correlations, what we have right now is the bearings of a systems where your employment chances and your health care expenditure are going to be in no small part determined by the measurements of little three-axis-accelerometers with no health-care grade certification, data scientists trying to make sense of the data but in large part no medical experience to interpret the data in a theory-driven way, and that is heralded as “the new way” for healthcare.

We need to do better.

(Disclosure: I’m currently retained by a startup to work in the connected health space. I’ve also previously contributed to the KANT HEALTH report)

2 Responses to “Spurious Correlations, Quantified Self and the Healthcare System”